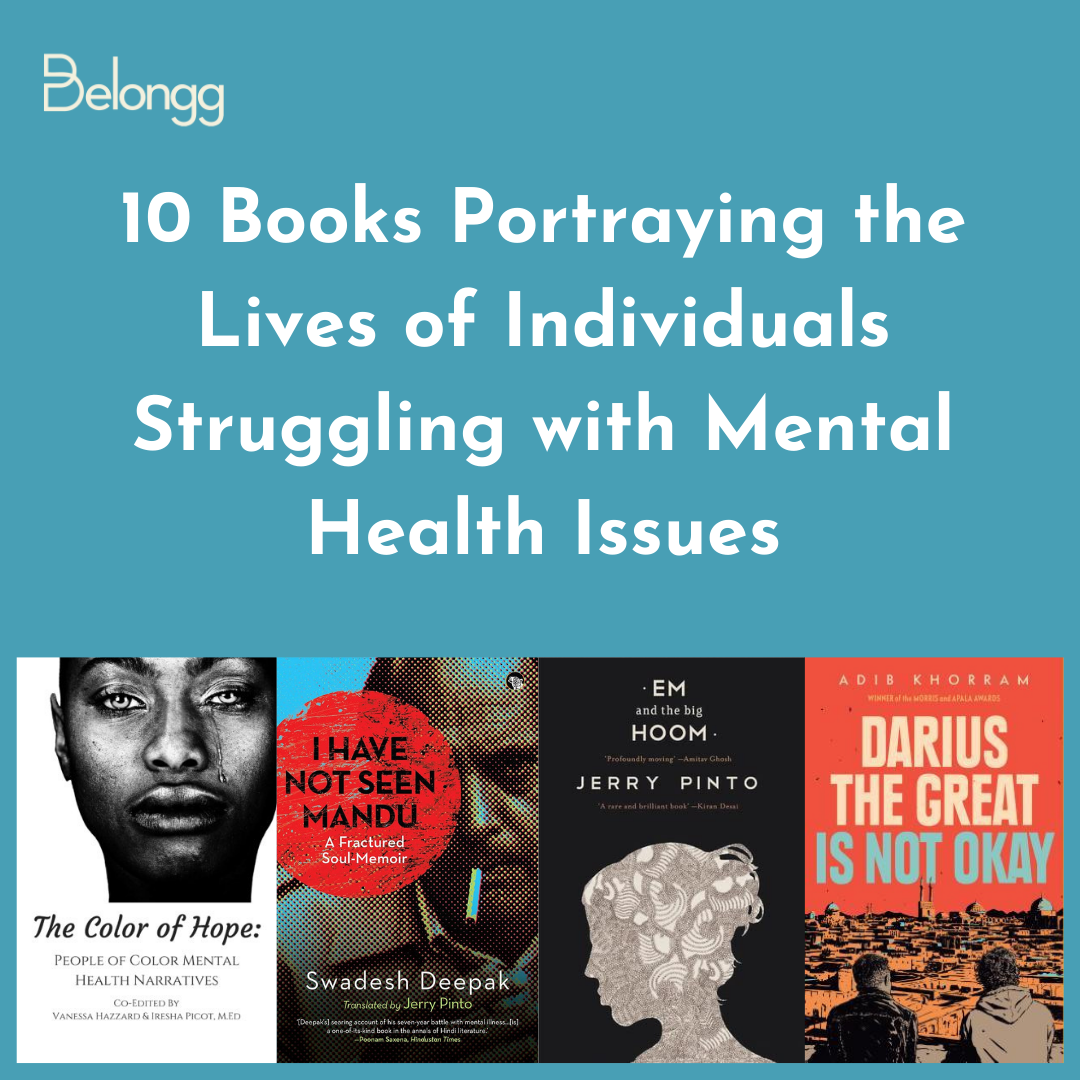 A 2011 World Health Organisation-sponsored study found that 36% of Indians suffered from a Major Depressive Episode (MDE) within their lifetime. That means India has the most number of people in the world who suffer from some form of depression at some point in their lives. Despite the worrisome statistics, social pressure to be “normal” manifests in unhealthy stigma and pressure against getting help.

Engaging with narratives on the lives of persons living with mental health issues therefore becomes all the more important. In juxtaposition to the widespread shame and ignorance, such narratives facilitate conversations on mental health that break through the cultural, social, and political barriers. Below are a mix of fiction and non-fiction books that sensitively bring to fore the nuances in feelings, thoughts, actions and experiences of persons with mental health issues with immersive detail that is bound to leave the reader more empathetic than they were before picking up the books.

Many of the books in this list deal with themes that some readers may find difficult to read. Some of the trigger warnings are mentions of mental disorders, mention of suicidality, sexual assualt, physical violence, neglect, illness/death of a family member and racism. We recommend you read the blurb and trigger warnings for each book before picking it up.

An Unquiet Mind is a definitive examination of manic depression from both sides: doctor and patient, the healer and the healed. A classic memoir of enormous candour and courage, it teems with the wit and wisdom of its creator.

Darius has never really been in touch with his Persian identity until visiting Iran—and his family—for the first time. It’s about family and friendship and mental health and learning to be okay with not being okay. Set in the beautiful tapestry of Iran, the book attempts to acutely portray a poignant journey of self-discovery.

Written over two years while the author battled depression, Dear Friend is a painful and yet richly affirming examination of what makes life worth living. Interweaving personal memoir with a wide-ranging celebration of writers and books, this is a journey of recovery through literature.

Everything Here Is Beautiful is, at its heart, a story of an immigrant, and a young woman’s quest to find fulfilment and a life unconstrained by her illness. A sensitively written book that explores an individual’s negotiation with mental health problems and the toll it takes on family and loved ones.

Jerry Pinto paints a vivid picture of depression, albeit of a manic kind. Imelda or Em as she is known to her family suffers from manic depression, where her highs are full of mad joy and her lows brim with suicidality. The narrator takes us through an emotionally charged journey as he unravels the mysteries of his ‘bumbling, manic depressive, bipolar disorder-afflicted, suicidal, terrifying and fascinating’ mother.

The narrator, part fictional part Janet Frame, takes the reader through the horrific conditions in two New Zealand mental institutions during a time when electric shock therapy and insulin shock therapy were standard forms of control and lobotomies, soaked in hope, were reserved for patients whose conditions resisted shock therapy. Frame herself escaped the procedure due to the popularity of her book which leaves the reader questioning the role of science and society in constructing sanity and civilization.

Among the most unusual books ever published in India, the novel records Swadesh Deepak’s descent into madness and his brief, uncertain recovery. Shortly after it was published, he left home for a walk one morning and never returned. This fractured, shattering narrative full of vivid hallucinations and other deeply human experiences is a must read. As Jerry Pinto,  the translator, writes in his introduction: ‘[Deepak’s] words carry all the scars of who he was and what his illness had made of him. His voice echoes from the bottom of a well.’

True crime, memoir, and ghost story, Mean is the bold and hilarious tale of Myriam Gurba’s coming of age as a queer, mixed-race Chicana. Blending radical formal fluidity and caustic humor, Gurba takes on sexual violence, small towns, and race, turning what might be tragic into piercing, revealing comedy. This is a confident, intoxicating, brassy book that takes the cost of sexual assault, racism, misogyny, and homophobia deadly seriously.

The Color of Hope: People of Color Mental Health Narratives is a project that sheds light on mental health in communities of colour by sharing stories by those affected by mental illness. By sharing their narratives, they open up discussion around the topic of mental health and break through stigma and shame.

When a tragic accident ruptures the family, ten years old Jas’s curiosity warps into a vortex of increasingly disturbing fantasies – unlocking a darkness that threatens to derail them all. A best seller in the Netherlands, Marieke Lucas Rijneveld’s radical debut novel offers readers a rare vision of rural and religious life in the Netherlands and opens up conversations on grief.