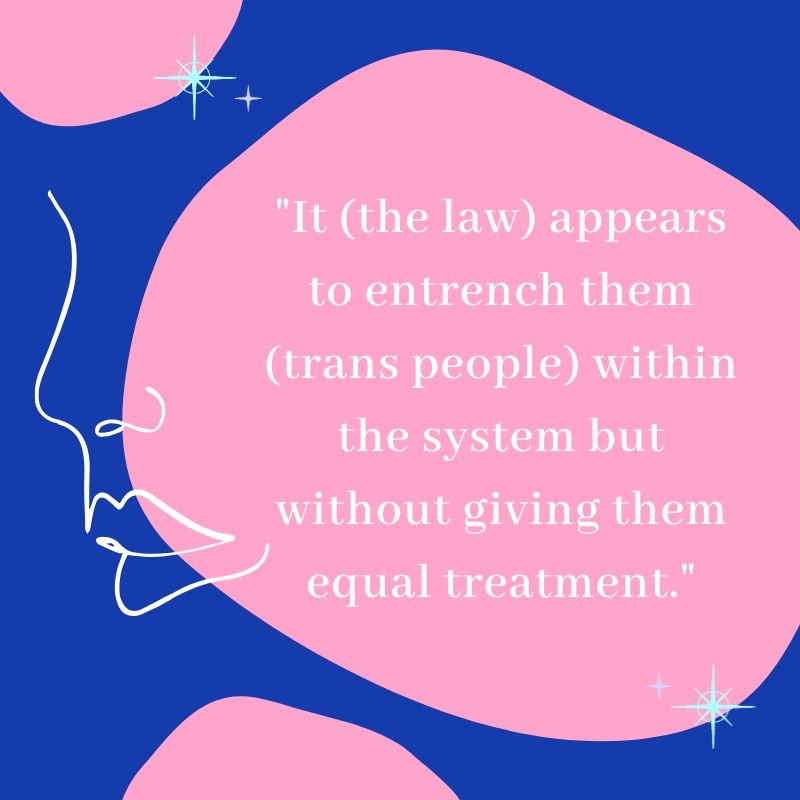 Breaking Down the Transgender Persons Act (2019)

All you need to know about the Act in simple words...

The Indian Parliament recently passed a controversial Act on rights of trans* people. Trans communities across the board have been protesting the bill for its problematic and discriminatory clauses.

We asked advocate Suruchi Kumar to help breakdown the Act for us in simple terms:

To simplify various provisions of the legislation, the Transgender Persons (Protection of Rights) Act, 2019 (“Act”) (which received the President’s’ assent on December 05, 2019) endeavours to afford protection to the transgender community by giving them: a separate identity by way of issuance of certificates; prohibits discrimination on basis of their identity at their workplace and even from their own families; prohibits unfair treatment meted out to transgenders by disallowing them access to health services, occupation of property and jobs; gives power to the government to frame schemes for their welfare, health and social security; setting up of a board namely National Council for Transgender Persons; and punish any person who discriminates a trans person on the basis of their identity and violates the provisions of this Act.

2. Considering this is the first time an Act of this nature has been passed, to what extent do you think the Act has accommodated for its stakeholders?

The Legislature after National Legal Services Authority v. Union of India passed the Act to ensure protection to transgender community, which has been defined under the Act to include trans-persons (whether or not through medical means) persons with intersex variations, gender-queer, and persons having socio-cultural identities such as hijras, kinner, aravani and jogta. However, it fails to take into account that one can also have different sexual orientation without having a different gender identity, as was explored in Navtej Singh Johar v. Union of India. The Act appears to be rigid in identifying only those which it sees as of different gender and fails to accommodate those who are of different sexual orientation. Such rigidity has defeated the purpose of allowing one to express his/her sexual orientation and be covered under the same umbrella as trans persons.

3. What are some of the most problematic clauses of the Act?

While the Act is a unique legislation, without the schemes and rules it is a loose piece of legislation. It offers protection but has no mechanism, for instance – under Section 9 and 10, a company cannot discriminate a trans-person in cases of employment and Section 11 states that there should be a ‘complaint officer’ to deal with complaints at workplace but there are no parameters set out under the Act as to who this person is, what are his/her qualifications and what is the mechanism for redressal of such instances. Further, under Section 18 there is punishment for physical and sexual abuse being imprisonment for a term not less than 6 months and extendable to 2 years but this punishment is less than the protection granted under the Indian Penal Code (IPC) for the same offences against other men or women, as the case may be. Also under Chapter III, the Act requires a trans-person to obtain a certificate for identification purposes and on the other hand also allows a trans-person to have their self-perceived identity, it is not clear what this term ‘self-perceived’ means and it is also not clear if a trans-person can be entitled to benefits under a welfare scheme without the certificate.

4. What could be the potential consequences of these clauses?

Given that the provisions regarding identification, implementation of redressal mechanism and schemes are currently vague, at least till the time the rules are framed, I see no force in Act; and the likelihood of any protection or welfare being given to a trans-person appears to be bleak. Further, with punishment of only 6 months to 2 years for an offence against a trans-person, which is higher in the IPC for an offence against a woman or a man, the law has brought their agency at a level lower than other sexes. It appears to entrench them within the system but without giving them equal treatment. Further, the Act nowhere mentions that any other gender specific laws are also equally applicable to trans-persons. For instance – will trans-women also get maternity benefits under the Maternity Benefits Act, 1961 if they decide to adopt a child, similar to a female employee?