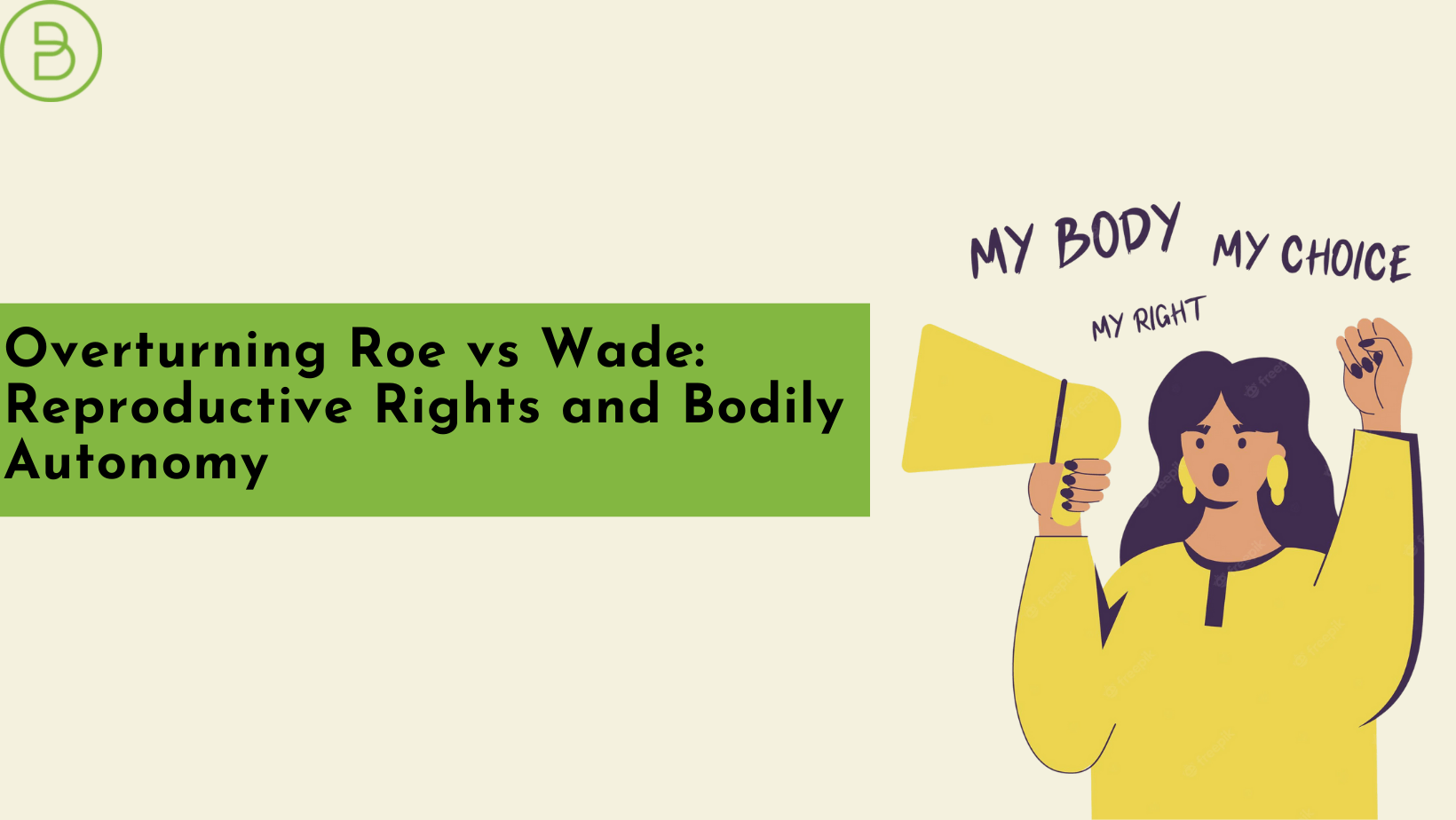 Overturning Roe vs Wade: Reproductive Rights and Bodily Autonomy in the US and India

On 24 June 2022, the American Supreme Court overturned a landmark constitutional ruling called Roe vs Wade, which had legalised abortion across the country. The judgement had ruled that a woman’s decision to have an abortion during the first three months of her pregnancy must be left to her and her doctor. Roe was a watershed decision tied not only to abortion rights but to the liberty doctrine as well. It brought together earlier cases that recognized a range of rights – from marriage to childbearing – to show how intertwined the right to abortion is. It strengthened the foundation for liberty rights, including the right to engage in private sexual conduct and the right to same-sex marriage. Thus, overturning Roe puts in jeopardy other liberty-based rights – including the right to marry who we want, to use contraception and to procreate.

Since this was the decision of the apex court, it overruled all other laws on abortion across the US. The reversal of the 1973 judgement means that now individual states can decide on the legality of abortion, i.e abortion laws will be different across the US. Even before Roe vs Wade was overturned, many states such as Oklahoma and Texas already had highly restrictive measures on the accessibility of abortions. Roe’s reversal allows the thirteen states that have the ‘trigger laws’ to either ban abortion automatically or within thirty days. While all of these state laws exempt abortion in cases of life-threatening pregnancies, only five of these states exempt pregnancies caused by rape or incest.

Abortion restrictions range from laws where abortion is permitted only to protect the pregnant person’s life or health to criminalizing abortion entirely. Research studies have shown that restricting safe, medically supervised abortions ultimately results in women having to undertake unsafe and potentially life-threatening procedures. As per the World Health Organization, unsafe abortion is a leading – put preventable – cause of maternal death and morbidities. The overturning of Roe vs Wade brings back the possibility of ‘coat hanger’ abortions and threatens the lives of women globally. Pertinently, the ‘coat hanger’ has emerged as a symbol of dangerous abortions in pre-Roe America, when women had no choice but to use household objects to terminate unwanted pregnancies.

Global Fund for Women further noted that the US Supreme Court ruling will be especially harmful to people of colour and people from low-income backgrounds. Not only do cisgender women and girls (who are assigned female at birth) need access to abortion services but access is also required by intersex people, transgender and people with other gender identities who have the reproductive capacity to become pregnant. The ban on abortion undermines bodily autonomy and any legislative restrictions on bodily autonomy are violent embodiments of systemic racism, sexism and oppression. The Supreme Court verdict is personal for all of us as it makes our body ownership conditional and undermines our equality.

Lack of access to safe, timely, affordable and respectable abortion care is not just a women’s rights issue but a critical health and human rights issue. Reproductive rights are essential for women to realize their human rights. Access to safe abortion has been established as a human right by numerous international frameworks such as the UN Human Rights Committee and the European Court of Human Rights. Reproductive rights are centred on women’s ability to make the best choices for their lives, including the number of children they have, if any, and the spacing between their children’s birth. The ban on abortion violates the right to be free from violence, to health, to privacy and even the right to life. Governments must trust women to know what’s best for them and not infringe on their bodily autonomy.

The global landscape of reproductive rights is constantly changing – while the US, Poland and Russia are taking backward steps, Columbia, Argentina and Ireland are making significant gains for reproductive rights. In the last 25 years, more than 50 countries have changed their laws to allow greater access to abortion. Ireland was one of these countries that joined the list after the May 2018 referendum when its citizens overwhelmingly voted to repeal the near-total constitutional ban on abortion. However, countries like Nicaragua, El Salvador and now the US have maintained draconian and discriminatory laws that ban abortion in nearly all circumstances.

In the Indian context, while many celebrate our more ‘progressive’ approach to abortion, the ground reality is far from ideal. Abortion is legal here less due to reasons of personal liberty and choice of women and more due to population growth control reasons. Also, pregnancies can only be terminated with the approval of a doctor, and many doctors ask for their patients to be accompanied by their male partners or family members during the procedure. Informal barriers to abortion include patriarchal mindsets, social stigma, especially for unmarried women, as well as discrimination against patients from oppressed-caste, tribal and migrant communities. With the overturning of Roe vs. Wade in the US, there is a sense of unease that the day may not be far off when India also backtracks on its abortion laws.