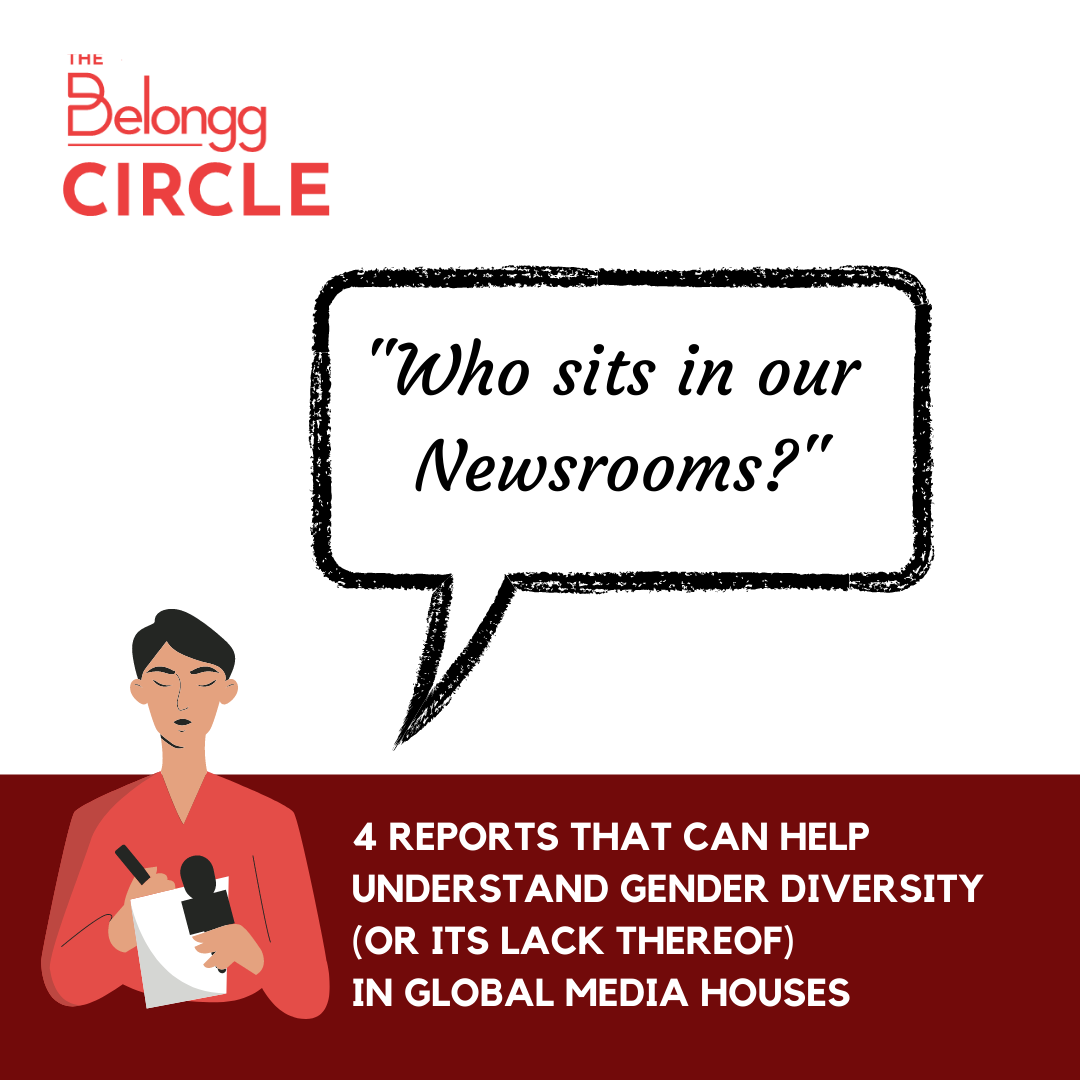 Who sits in our newsrooms?

Newsrooms and media houses play a critical role in bringing different stories and narratives to a larger audience, but it is equally important for us to ponder who occupies these newsrooms. The following reports are illustrative of the lack of gender diversity in news outlets and media houses across the globe.

Note: While this list is in no way exhaustive of the lack of representation in the journalism sector, the gender binary it chooses to adopt is also speaking of how these spaces are imagined. This list is meant to serve as a starting point to better understand representation within this sector.

It was found that 73% of the top management jobs were held by men, who also held two-thirds of reporting jobs as well. The senior professional level seemed more promising, with 41 percent roles being held by women. Men held more than 64 percent of the positions in ‘other’ roles within media companies as well, including sales, finance, public relations, human relations, accounting and administration. Overall, women represented only 33.3 percent of the full-time journalism workforce in the 522 companies surveyed.

2. The Missing Perspectives of Women in News

Commissioned by The Bill & Melinda Gates Foundation and authored by Luba Kassova, this report sought to examine women’s representation in newsrooms, newsgathering and news cover in India, Kenya, Nigeria, South Africa, the UK and the US. The report established four indicators of gender equality and representation-

(a)   Gender diversity in the workplace and in leadership (organizational resources)

(b)   Women as sources of news expertise (newsgathering)

In the six analyzed countries, less than 1% of news stories cover gender equality issues. In 2019, women’s share of protagonists or of quoted experts/sources in the news was between 14% and 30% in the six countries. Not only do women get substantially under-represented in the news coverage, the few women who do make it to the news rooms experience a gap in the career progression and salaries they get viz-a-viz their male counterparts.

To address the challenges uncovered by this research, the report offers 50 evidence-based recommendations and a checklist for newsrooms to use as they work to increase women’s representation, challenge biases and work to achieve gender parity.

2. The Missing Perspectives of Women in COVID-19 News

This report sought to examine women’s representation in COVID-19 newsgathering and news coverage in India, Kenya, Nigeria, South Africa, the UK and the US. This was done through three indicators of gender equality-

(a)   Women as sources of news expertise

The report discovered that women were nearly 3 to 5 times less likely to feature as protagonists in coronavirus news coverage, dependent on the country they were residing in. The report also contains 21  recommendations that could potentially amplify the voices of women in COVID related stories.

The American Society of News Editors (ASNE) has been conducting yearly surveys that reflects newsroom demographics in the United States. The 2019 News Leaders Association’s  (NLA) Newsroom Diversity Survey (which was formerly the ASNE Newsroom Diversity Survey) found that people of colour comprised 21.9 percent of salaried employees reported by all newsrooms in the survey. They made only 18.8 percent of newsroom managers at either print/digital and online-only publications. Women made up 41.8 percent of all newsroom workers. The results summarize responses from 429 news organizations, including 267 newspapers and 65 online-only news sites.