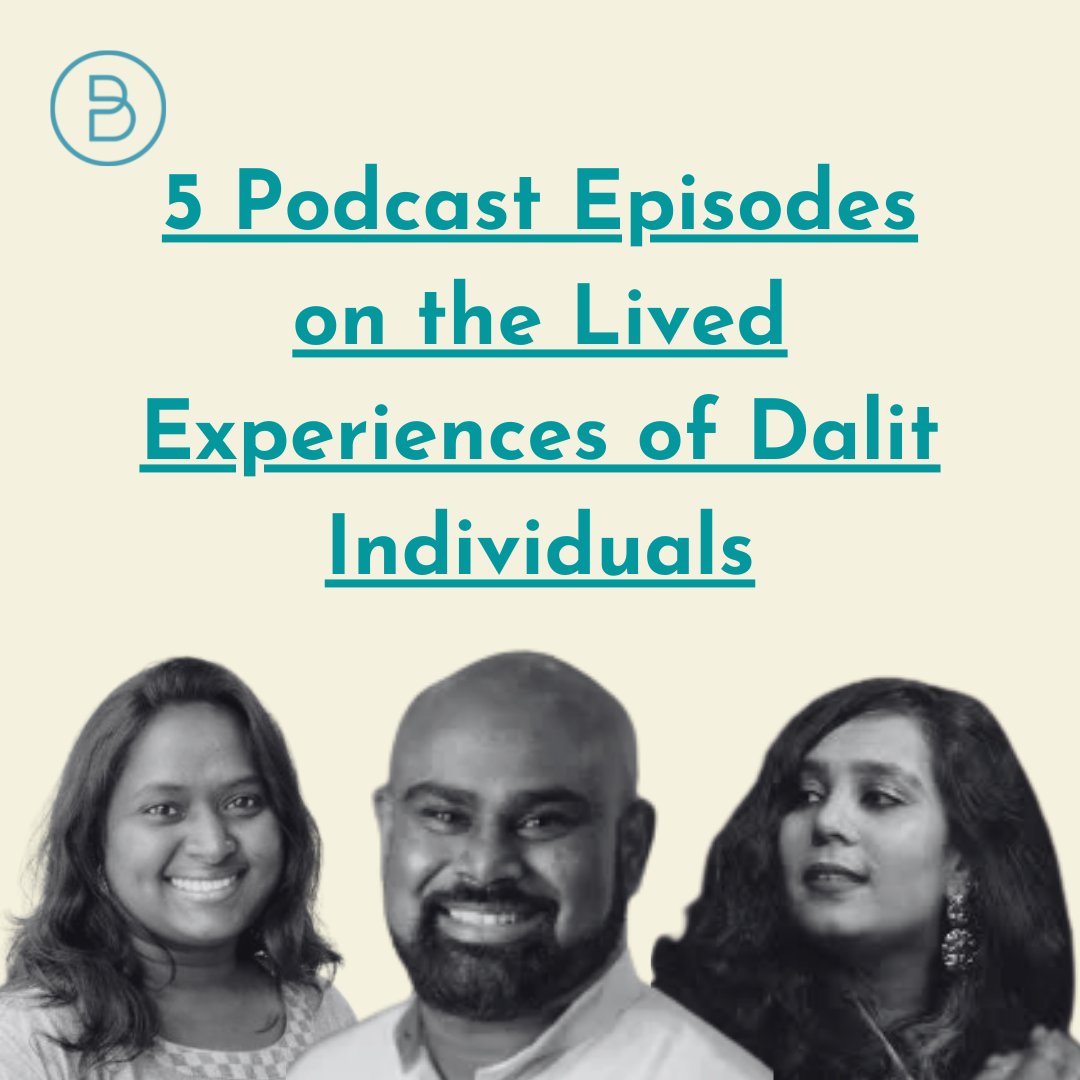 Podcast Episodes on the Lived Experiences of Dalit Individuals

Dalit voices are not represented in mainstream media but fortunately, a few podcasts have risen to fill this vacuum. We recommend the five episodes below.

In a three-part series on the ‘mental health of marginalized communities’, the Ambedkarite Central Podcast discusses the personal mental health-related experiences of a student, a scheduled caste woman and an artist. These episodes provide much-needed insight into the complexity of the lives of marginalized individuals and the way in which caste seeps into all crevices of their life like growing up, education, personal romantic relationships, profession, etc.

The episodes are in Hindi. No translation or transcript is available

In an episode of this podcast, advocate Kiruba Munusamy discusses what it is like to be a Dalit woman. Kiruba talks about her experiences as a child growing up in a slum hiding details about her life that even mildly suggested her caste identity. As the episode progresses, she divulges harder truths about life as a dark-skinned, plus size Dalit woman when. Caste-based discrimination defined her life as a student in a law university where she says “for five years, I was sitting along in the last bench” and in court too. Munusamy also briefly discusses the policies and movements that fuel such discrimination.

The episode is in English. No translation or transcript is available

The author of Coming Out as Dalit Yashica Dutt discusses the opposite end: what it is like to be passing as non-Dalit, the life that comes with dropping your last name “the only ticket to not being actively discriminated every day” and reclaiming it later. She discusses the role of education, the extreme measures Dalit families must take to pass as equals to the upper caste Indians, the willingness to forgo your identity and culture for a life without oppression and shame, and the discrimination that her father and grandfather faced as Bhangi men and so on. She discusses living life with shame and feeling inferior and the liberation that came with leaving India and then changing how she was made to see her caste. As an adult, Dutt now recognizes how taxing hiding her caste identity has been but the toll that this performance took on her mental health was not a conversation that could be had when there was no food on the table.

The episode is in English. The transcript can be accessed here.

Playwright and researcher Sudhir Selvaraj discusses the lives of “crypto Christians” or Dalit Christians and the consequences of the intersection of these identities in an episode of this podcast titled: ‘Structural Violence and Indian Christians’. The caste system is seen as specific to Hinduism and as a result, Dalit Christians and Muslims have been invisibilized.Dalit Christians are excluded from both the groups they belong to, the Dalit community and the church. Sudhir outlines the policies, social exclusion and extreme violence that define their everyday lives. One of these instances of violence has been captured in his audio play Homeland. Understanding how the doubly marginalized are treated by the state, the exclusion and powerlessness that they feel within the communities that they belong to and the structural inequalities that define their everyday lives, is important for anyone who is trying to expand their knowledge and awareness and be a better anti-caste ally.

The episode is in English. No translation or transcript is available.

Related readings: On the Anniversary of Kandhamal Violence, the Least We Can Do Is Remember

“If Hindus migrate to other regions on earth, Indian caste would become a world problem.” – Dr B.R. Ambedkar in his thesis ‘Castes in India’

“If it worked for them in India why will they stop using it in America” – Prashanth Nema, quote from the episode.

Five panellists discuss caste in America with Anurag Minus Verma in technology corporations and universities. Panellists discuss how the alignment of Indians to the White ruling class catalyses their enforcement of class-based discrimination, discrimination in housing, employment and academia, the difficulty that non-Savarna students face in being accepted to American universities, the cognitive labour of providing a different perspective to theories, the difficulty of networking in tech groups, the challenge of explaining caste in India when race is used as an analogy, etc. This discussion sheds light on how caste is experienced by employees and graduates in America who live among Indians who deny the existence of the caste system in America while enforcing it and Americans who struggle to understand it.

The episode is in English with some Hindi spoken by the guests. No translation or transcript is available.